Today our association has 4 core functions:

An Association created by enthusiasts to rebuild the Hermione

The whole adventure began at the end of 1992 when a group of enthusiasts dared to launch the extraordinary cultural, heritage project that was building an exact copy of the ship which the Marquis de la Fayette sailed on when travelling to America to announce France’s support for the Insurgents during their fight for independence.

This group included various people who were passionate about the sea and history, including members of the Centre International de la Mer (based at the Corderie Royale) like the academic Erik Orsenna, the founding president, Benedict Donnelly and city officials of Rochefort including Jean-Louis Frot, then mayor of Rochefort. For nearly 5 years, this small band of enthusiasts would do everything they could to make this dream come true.

The project was a gigantic challenge but the city of Rochefort supported it from the outset, as would successive mayors Bernard Grasset and today Hervé Blanché. The department of Charente-Maritime and the Poitou-Charentes region also quickly contributed to the project with the Hermione bringing people together across political divides.

Until then made up solely of its founders, the Hermione–La Fayette association set up a participatory structure in 1996 based on active members and a shipyard open to the public.

Today, our association operates thanks to volunteers supported by a team of professionals.

Discover the faces of our team !
The Hermione is unique, it’s almost like it’s a boat representing all of France, as its influence has international reach and its potential is vast. The community power that this frigate generates is highly motivating and makes you want to take the project even further! 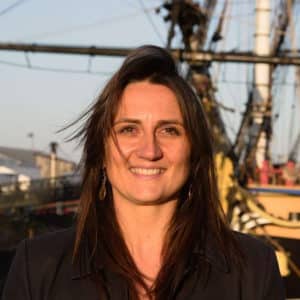 An association that owns a frigate and organises the ship's trips

The dream of sailing the Hermione to America, in the wake of La Fayette, was foremost in everyone’s mind during her reconstruction. Once this was completed, the association approached several shipping companies to find the ideal owner for the Hermione. But as no company followed this up, the association embarked on the new challenge of becoming the owner of its own frigate. Prepping for and organising the Hermione’s voyages has therefore become one of the association’s core functions, along with her maintenance. So that we can fulfil this amazing challenge, a special crew was formed, made up of professionals and volunteers, the boatswains. All of them had to be trained in sailing on board the frigate.

As such, the Hermione‘s maiden voyage was made in 2015, when she crossed the Atlantic from Rochefort to Boston, on the trail of La Fayette. A symbol of freedom, this trip underlined the friendship between France and America and recalled the aid that France provided to help the American Insurgents.

Since then, the Hermione has made many other voyages:

In 2019, she took part in the Grande Armada de Rouen and celebrated the 75th anniversary of the Normandy landings during her “Normandie Liberté” voyage.

So that the Hermione can continue to sail, it is maintained on a daily basis thanks to a team of professional sailors supported by volunteers. Together, they maintain the frigate all year round in Rochefort while visitors watch.

Implementing training schemes is the association’s third function. Recognised as a training organisation since 2017, it trains the boatswains itself and strives to create programmes that raise awareness about trades in the maritime sector and that promote manual professions.

(COET-MOF) under the aegis of the French Ministry of National Education, Higher Education and Research. It promotes French know-how through the “Un des MOF” diploma contest, thus recognising over 200 trades in industry, crafts and services.

Learn more about our training scheme
This collective title is a wonderful recognition of the exceptional shipyard which has seen 4.5 million visitors over the 17 years it has been at the Arsenal de Rochefort  and is a great encouragement to continue towards the goal of becoming a school for know-how (master sailmaker , shipwright, rigger, etc.) and soft skills (team/crew spirit, surpassing oneself, sense of teamwork, etc.) based on the Hermione in the Arsenal des Mers

President of the Hermione–La Fayette association 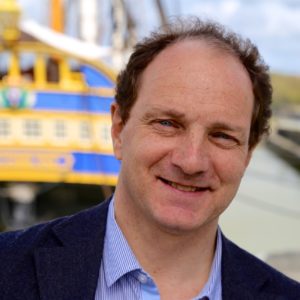 From the very start of the construction site in the heart of the former Arsenal de Colbert, the adventure of the Hermione was intended to be shared with the public, who were a real generator of funds for this unprecedented venture. The site was therefore designed and fitted out to receive visitors throughout the major stages of this reconstruction.

Launched in the wake of the Corderie Royale’s renovation and the creation of the Centre International de la Mer, the replica Hermione project has attracted more than 4.2 million visitors during its 17 years of construction who were fascinated by all the stages of reconstruction. This enthusiasm has meant the site is now equal in attraction to the main tourist sites in the region and is third place among the most frequented sites in the Charente-Maritime. The Hermione is also deeply rooted in the identity of the Rochefort populace, becoming one of the major symbols of their city even equalling the house of Pierre Loti or Les Demoiselles. In 2019, the association joined forces with the Corderie Royale, the Musée National de la Marine and Accro-Mâts to create a new unique tourist offer based on history and seafaring adventures with a shared route and shared events and a single ticket. The Arsenal des Mers was thus created thanks to the investment of local authorities (Nouvelle Aquitaine region, Charente-Maritime department and Rochefort Océan urban community), to show the public that the history of the Arsenal is still being written and that this site remains a source of innovation, inspiration and creation, a cultural site and a tourist engine, a force of inventiveness and imagination with benefits for a whole territory and region.