It was in September 2014, marking the occasion of the Hermione’s first outing in the Atlantic Ocrean, that the Hermione’s contruction officially ended.

The frigate’s first crew then got ready to take over from the multiple carpenters, riggers, sculptors and blacksmiths to take the ship on the next’s major stage of its life – its voyages.

Some people may remember that its exit was thwarted by the ship caisson, but we personally mainly remembered the extremely exuberant crowd who cheered the frigate all the way along the Charente. Thousands of people came to greet “their Hermione”!

These sea trials included a public stopover in Bordeaux and numerous engine and electronic tests, and very importantly, lots of sailing manoeuvres in all weathers.

Although thwarted by an engine failure at the very beginning of the campaign, the sea trials revealed the Hermione’s extraordinary seaworthiness. As the Marquis de La Fayette noted at the time: “She flies like a bird.”

The Hermione is a sound, authentic and incredible sailing boat that just asks to sail. At the least breath of wind, she accelerates visibly and responds gently to the wheel. So sailing in such conditions is pretty much a dream come true.

Commander of the Hermione 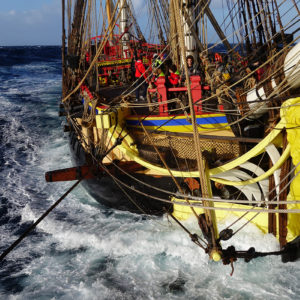 On 6-7 September, the Hermione left her dry dock in Rochefort to head out to sea
September 8th 2014

Leaving the commercial port of Rochefort

Before a tightly-packed crowd, the frigate passed the exit lock of dock number 3. Thousands of people were massed on the city’s ramparts and all along the river.
7 to 11 septembre

First engine tests One of the two electric motors showed damage. Sailing trials, on the other hand, proved conclusive! 11 September
11 to 28 September

The technicians stayed busy solving the propeller problem so that the Hermione could go back to sea. Meanwhile, the crew continued their training and organised life on board
september 29th

Resumption of the sea trials campaign

Finally, the Hermione can go back to sea. The frigate finally sets sail and encounters the ocean swell for the first time.
October 6th

On board, there was great enthusiasm when the frigate passed through the legendary Raz de Sein at night. It’s an area of strong currents and rocks that requires constant vigilance.
October 10th

Bordeaux had the honour of playing host to the Hermione’s first public stopover. The first of a long series! Throughout this stopover, thousands of curious people came to see the frigate moored at the main quay, right next to the famous stone bridge and the Place de la Bourse.
October 17th

Technical stopover in the Arsenal Maritime de Brest. Moored next to gleaming frigates and near the BPC Dixmude, our beautiful three-master seemed very small alongside all these steel monsters.
Octobre 21th

Departing from Brest, the Hermione set off on an adventure!

The programme included sailing in the Iroise Sea, crossing the English Channel, greeting our friends from England and sailing due west in the Bay of Biscay.

Sailing trials in the Iroise sea

On 9 November, the Hermione returned to her birthplace in order to be able to prepare for her next great adventure… Crossing the Atlantic Ocean in the wake of La Fayette!
Go to Top