After the Americas in 2015, Brittany in 2016 and the Mediterranean in 2018, the Hermione was to begin its 4th voyage on 4 April 2019, at 4 a.m. from Rochefort. The replica of the Lafayette frigate was to sail to the theme of “Normandie Liberté” to celebrate the 75th anniversary of the Normandy Landings. Several stopovers and lots of showcases were to feature during the Hermione’s trip.

This “Normandie Liberté” itinerary was to close the Hermione’s tour of major French ports and was a way of saying thank you to all the French supporters of this gigantic reconstruction project. 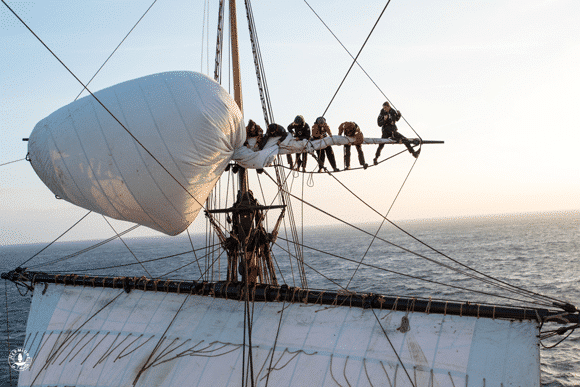 On the initiative of this prestigious stopover, the City of Cherbourg in Cotentin, the Cotentin Agglomeration Community and the Manche Departmental Council financially supported this event, which was organised by the Cotentin Tourist Office.
Ouistreham Riva-Bella
(from 14 to 17 May)
Ouistreham Riva-Bella, a port located in the heart of the Normandy Landing beaches, celebrated with a journey along the Canal de Caen and a salute to the major historical sites of the Second World War:  : Pegasus Bridge and château de Bénouville.
Saint-Nazaire et Nantes
(from 23 to 25 May) and (from 25 to 28 May)

Two major ports in the Pays de la Loire region accommodated the Hermione for an exceptional nautical and cultural event: the second edition of Débord de Loire, running from 23 to 27 May.
For two days, from Thursday 23 to the morning of Saturday 25, the Hermione was moored in the heart of Saint-Nazaire a few metres from the former submarine base and was open to the public.
Saint-Nazaire was a strategic port in the First and Second World War and the bridgehead for the US Army. During the First World War, hundreds of thousands of American soldiers landed in Saint-Nazaire, symbolising the first support that arrived from the United States to help France. 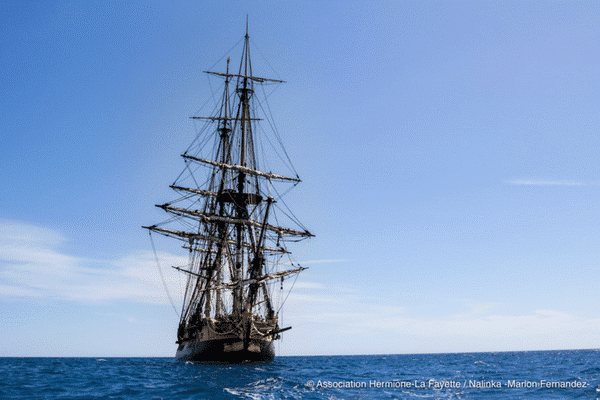 From Saint-Nazaire to Nantes, large ships, old rigs, contemporary and innovative boats, small leisure and sports units, work boats, and racing sailboats paraded alongside the Hermione for an unprecedented nautical gala on the Loire, on Saturday 25 May. The Hermione, the Frigate of Liberty was moored on Quai de la Fosse until Monday 27 May.

In Nantes, the river set the pace with entertainment for the general public and the Hermione welcomed visitors who wanted to find out more about life on board.
Rives-en-Seine
(5-7 June)
From one big river to another, the Hermione set sail for the river port of Rives-en-Seine in the loops of the Seine. With the support of Caux Seine Agglo, the city of Rives-en-Seine held a festival with the Hermione as its focus during a two-day stopover.
The Armada de la Liberté in Rouen, an exceptional stopover to finish off the Tour de France

Rouen as the high point of this 2019 Voyage, played host to the Hermione during the Armada de la Liberté. It was a gathering of the largest tall ships in the world, from 6 to 16 June 2019. This event was to unite over 30 large ships, international military vessels, state and sailing school tall ships for its 30th anniversary. The Armada de la Liberté was celebrated by sailing up and down the Seine (6 and 16 June) over 120 kilometres through the magnificent landscapes of Normandy.

With 2 to 3 million visitors expected in Rouen, it was the only festival of its kind in Europe and the crew of the Hermione were enthusiastic about participating for the very first time.

Honfleur added its charm to the party
(from 17 to 19 June)
There were still a few nice surprises left over. This was particularly the case for the stopover in Honfleur which was to welcome the frigate from 17 to 19 June. For three days, the medieval city so dear to Claude Monet and Eugène Boudin played host to the Hermione and was to mark the last Norman stopover of the 2019 itinerary. A historical and artistic setting that perfectly suited the famous ship!
Return to Rochefort
5 July

The 2019 trip: stopover cities committed to the project’s success

In addition to the contribution from the stopover cities, the Hermione is continuing discussions with economic players to achieve its financial objectives of achieving an equal public-private balance (50/50) as was the case in 2018. As such, the Hermione La Fayette Association is offering companies the opportunity to get involved in partnership and public relations, private events and/or sponsorship, allowing them to associate their image with the values represented by the Hermione and her crew.

A “Hermione Youth” sponsorship scheme run by the Fondation Hermione Academy and which is open to individuals, companies and institutions is responsible for sponsoring and financing the training of young local boatswains. 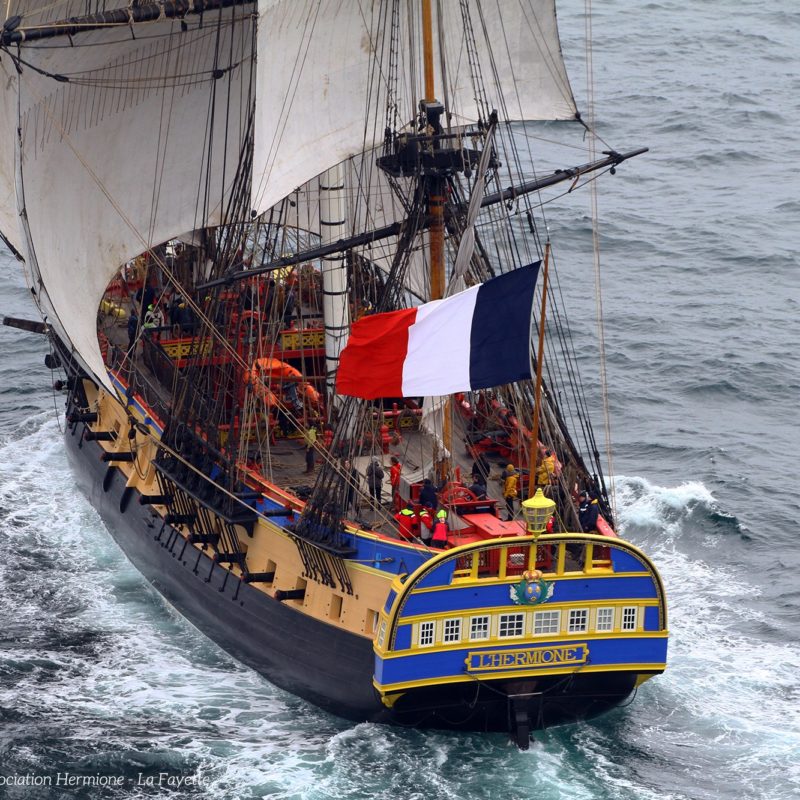 The trip in videos