The Hermione's grand inaugural voyage to the usa!

An Atlantic crossing to celebrate History!

An exceptional adventure in America, following in the wake of La Fayette

A journey in the footsteps of La Fayette with American stages chosen for their historic importance in the American Revolution and France’s support for the new American nation.

Hermione’s trip to America, on the trail of La Fayette, was an extremely powerful symbolic event to raise the awareness of modern Americans about the historic bond between France and the United States. The Hermione made a journey from April to August 2015 of over 7,500 nautical miles (13,000 kilometres) across the Atlantic and along the east coast of the United States and Canada.

For the thousands of members, the millions of visitors to the Hermione shipyard in Rochefort and everybody who is a stakeholder in the Hermione–La Fayette Association, making this transatlantic voyage was the culmination of both a dream and an incredible risk that paid off after many years of commitment.

“The choice of the American stopovers was decided on by a committee of experts and were selected for their historic importance in the American Revolution and France’s support for the new American nation.”

Before her grand departure for the Americas, the Hermione finished fitting out in the trawler basin of La Rochelle. 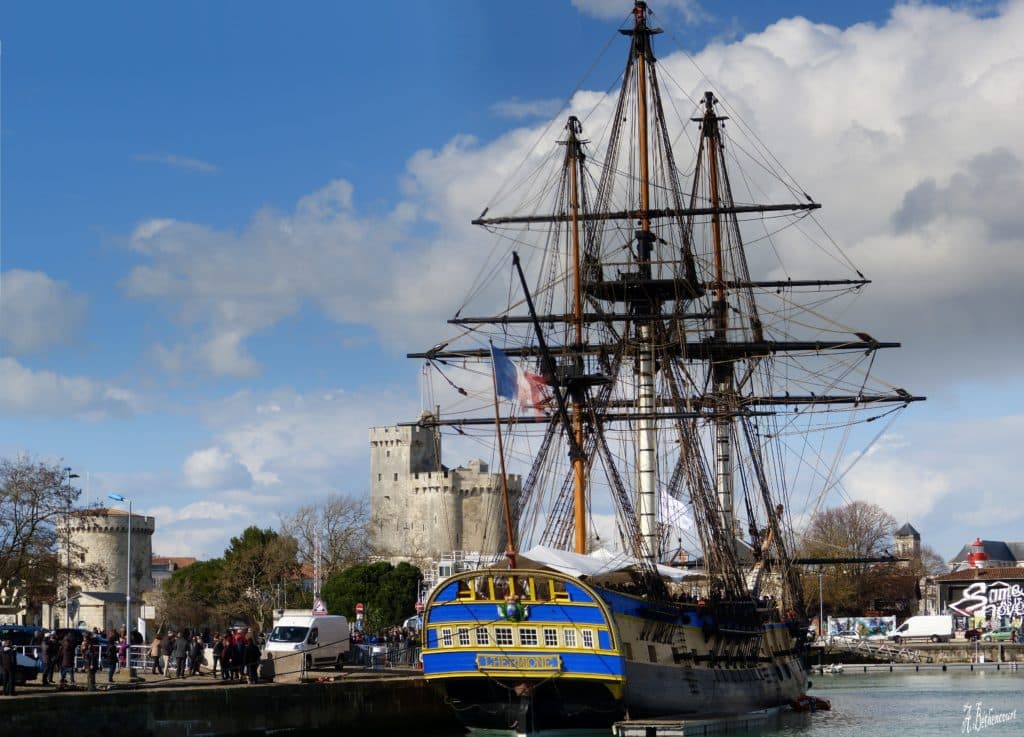 We knew this departure would be a day full of mixed emotions, excitement and apprehension. Did we even realise what it would really be like? 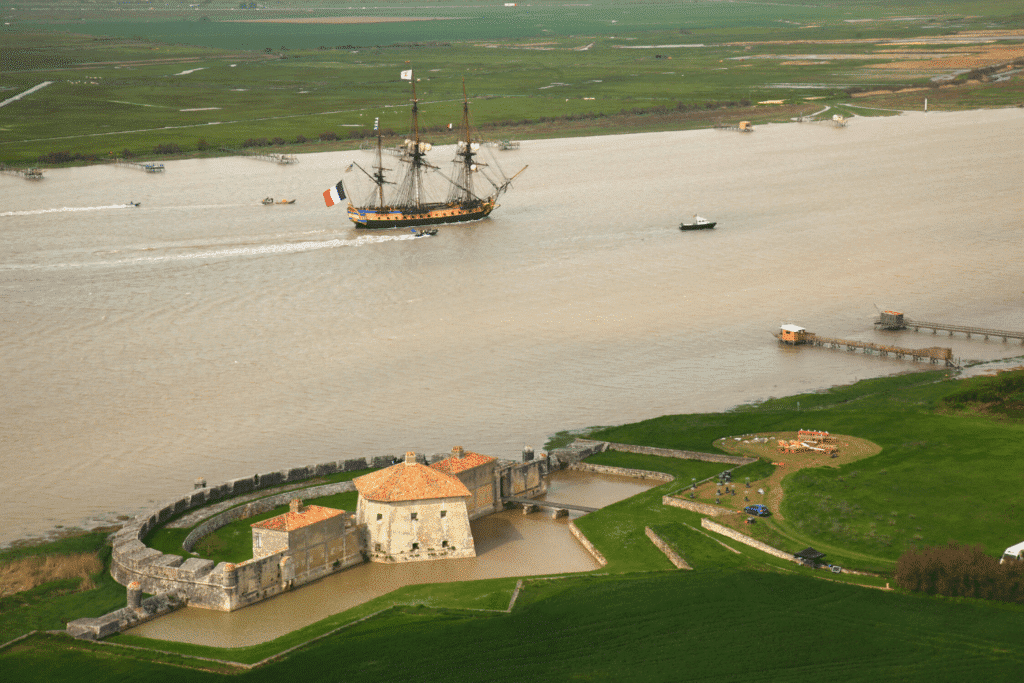 The day started with a pleasant surprise, since the frigate Latouche-Tréville, named after the historic commander of the Hermione, accompanied us at sunrise.

First squall on the horizon

The temperatures rose slightly, the sun is shining, the sea is stunning. The day started in style because at sunrise, one of the most modern ships in the world came to join us.

The frigate Provence, which had just left its shipyard, had indeed decided to take a few minutes out from its itinerary for a highly symbolic photo shoot alongside us. 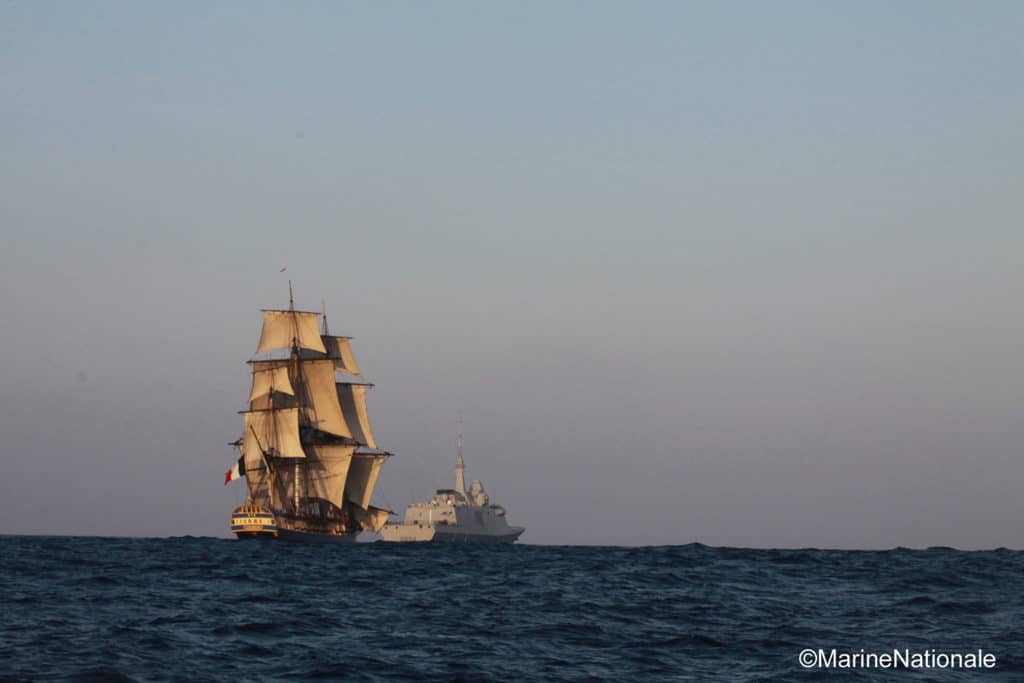 The wind then calm

We were expecting a squall, but in the end we just brushed by the depression.

It had been a slow night for everybody, with several watches occupied by a tuna fishing lesson for the Port watch, taught by officer on watch and former fisherman, Dominic, or even a bit of a Swedish lesson for the middle team.

The coast is close but we are still at sea.  The light we see on land only seems to reinforce the enclosed bubble of our life at sea.

A long day with more manoeuvres than the last three combined, then a swim and a meal eaten at sunset on the deck, all together.

A day of sailing

Waking up was hard for everybody this morning. The combination of a rather late watch and better quality sleep due to less boat motion at anchor was hard for some people to not to succumb to.

The first real rest you get after 10 physically demanding days at sea is often the first time you realise how much sailing takes out of you, especially aboard the Hermione.

First official and international stopover for the Hermione. First leg of the journey for the crew. 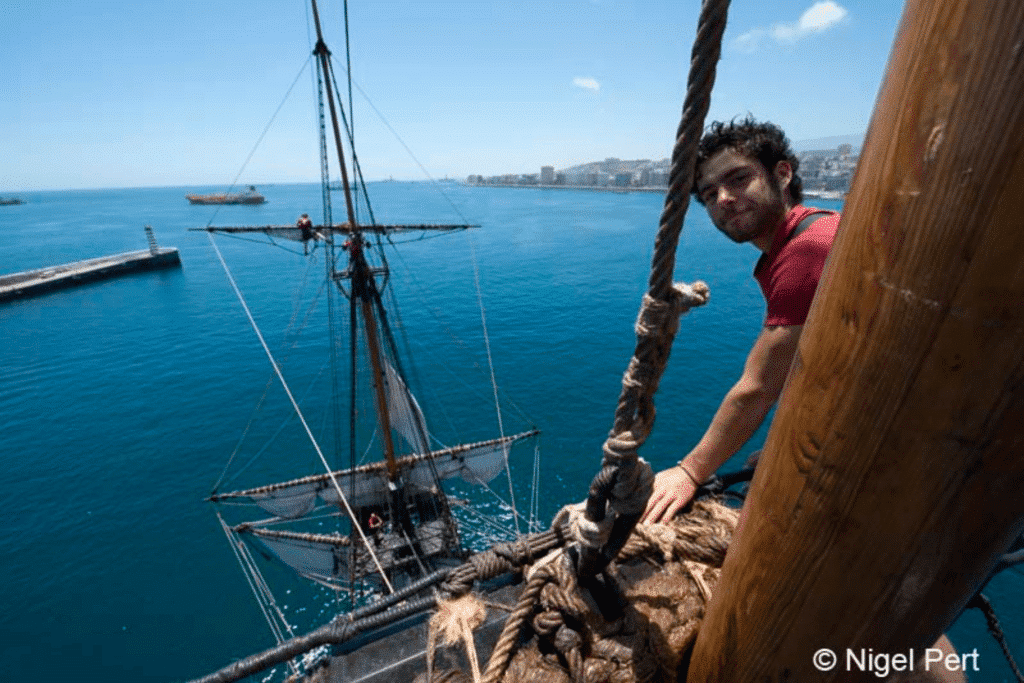 From 6 May to 4 June, outbound transatlantic crossing
May, 6th

Departure from the canary islands

Lo and behold, the sails are set and the Canarian coasts gradually become distant shapes in the mist behind us. After one last visit from the mayor of Las Palmas who gave us a letter to give to the mayor of Baltimore and a last goodbye to the few boatswains who had disembarked, who were still standing on the quay, we raised the gangplank and took in the hawsers, and set off for America.
May, 9th

Since our departure from France, we have been followed by a very special sailboat, for two very distinct reasons. This sailboat is the K VIII, which will accompany us throughout our Atlantic tour.

The KVIII is a prestigious racing yacht, winner of the Route du Rhum in 1982 and finishing 4th in its category during the 2014 edition. But the best thing is that it’s being sailed by a crew from the Lycée Maritime de la Rochelle (a maritime college). The crew of the Hermione includes several volunteers from this college, and one of them is also the watch officer aboard the K VIII for this transatlantic crossing. The trip is being supervised by two college teacher skippers, whom we will have the opportunity to meet when we visit the boat during a future American stopover. 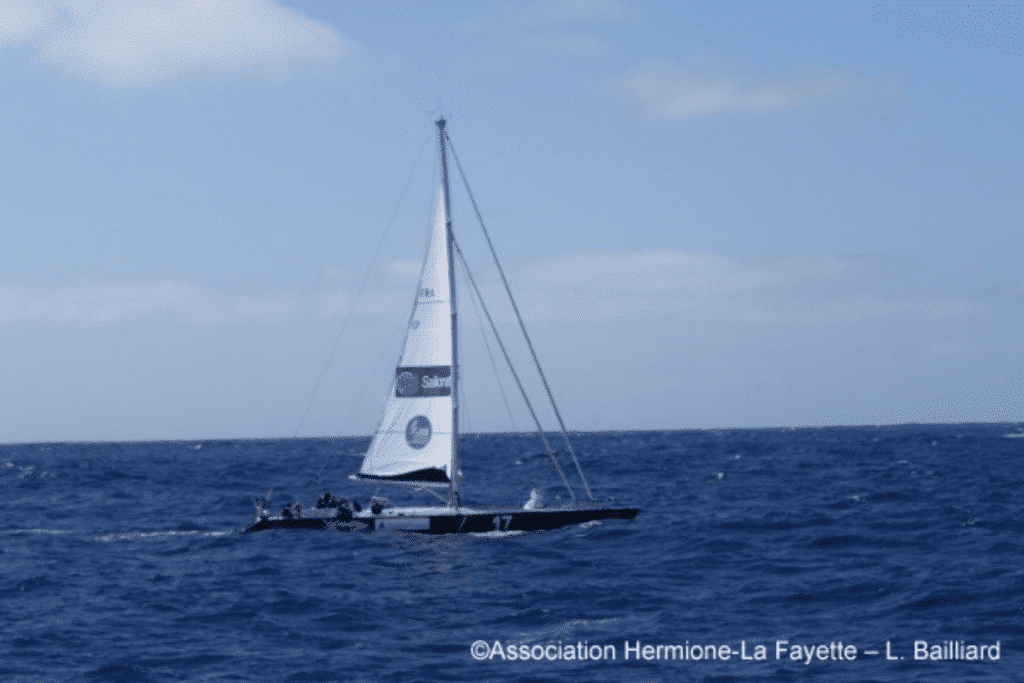 Yesterday, the wind freshened up throughout the day then really picked up at the end of the afternoon. As the gusts exceeded 20 knots, we therefore hauled up the fore and main topgallant sails in order to preserve the top of the masts.

Gradually, the sea has also been getting choppy and we have been sailing in a swell of 2 to 3 metres for 24 hours now. 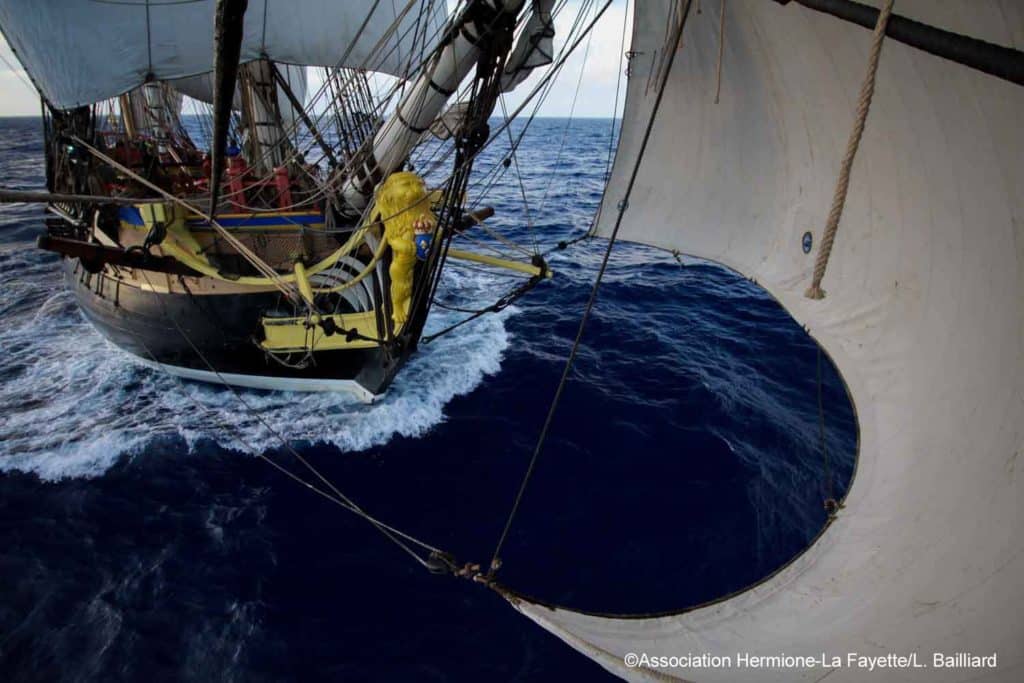 And here we are, starting the second week of our transatlantic crossing. We’re using almost all the sail, with the exception of the mizzen (used mainly to balance the ship’s stern in manoeuvres): fore and main topgallants, mizzen topgallant sail, fore and upper topsails, mizzen topsail, foresail, mainsail, main jib, small jib, spritsail, main topsail staysail, main staysail, and the mizzen jib!

No less than 14 sails that allow us to maximise the trade winds as much as possible so we can get ahead of a depression cycle that is blocking our way. The result was that, in the last 24 hours, we have maintained a pretty reasonable average of 7.5 knots. 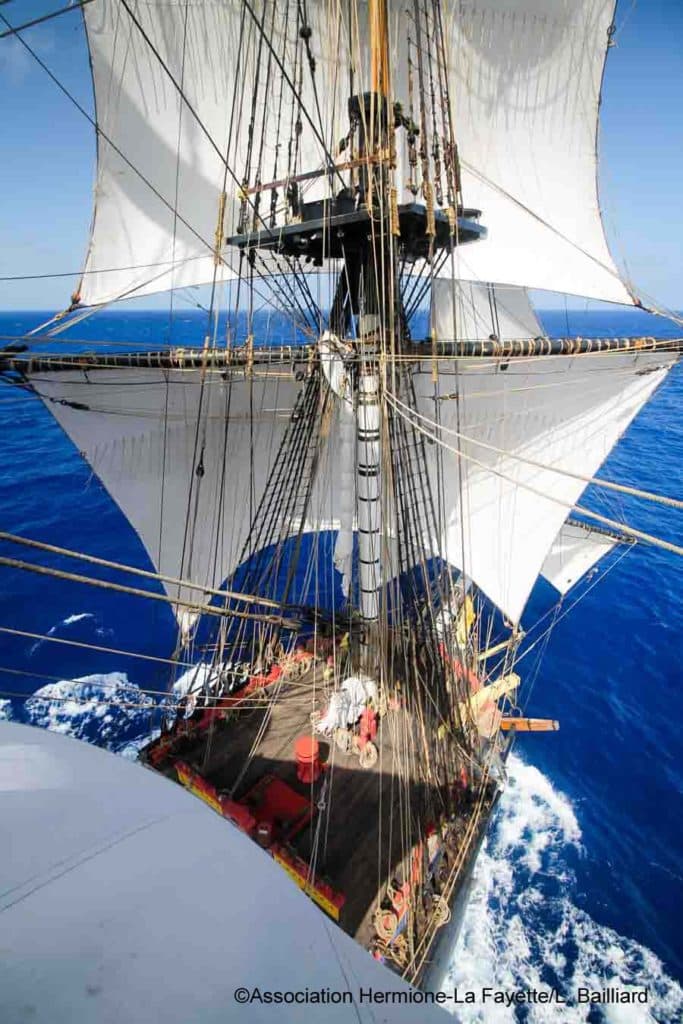 Yesterday we left a small squall behind us without seeing much wind or rain. We ran across it again today, but this time it was in fine fettle.

Fuelled by the high sea temperature, yesterday’s cold front caught up with us today and brought back fond memories of the 2014 autumn trials. 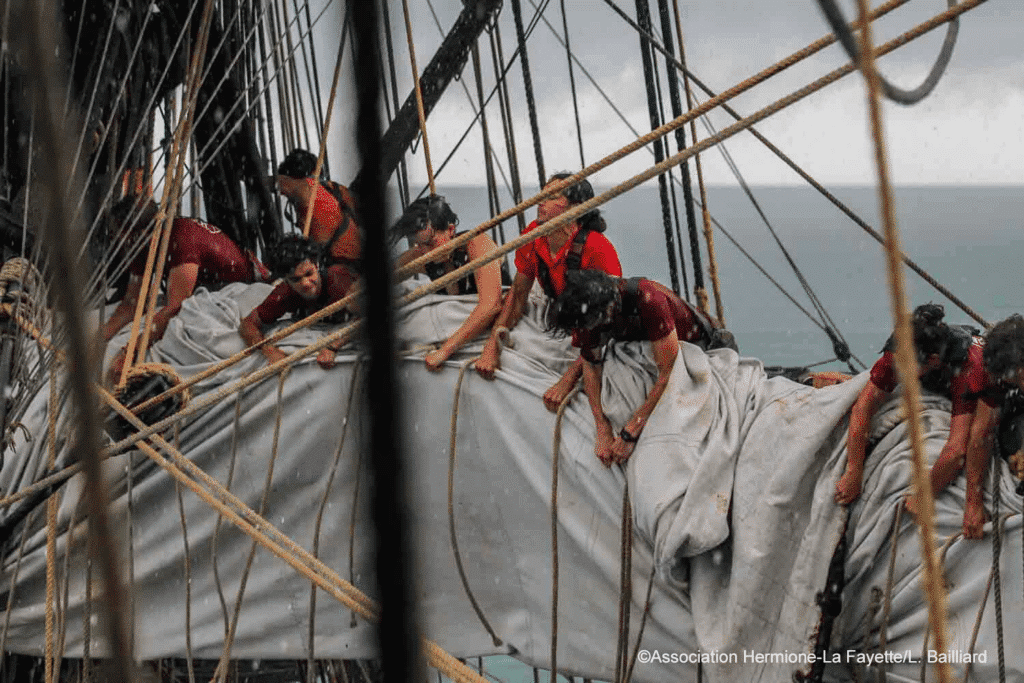 There had been talk going around of course. We knew that our route brought us close to Bermuda. But we hoped to see the archipelago and at best stop and anchor there. And finally we heard the good news – we were going to stop there briefly at the dock.

After three weeks at sea, we therefore set foot ashore around 10 a.m. on Tuesday for a super quick stopover in a little slice of paradise lost in the middle of the Atlantic. 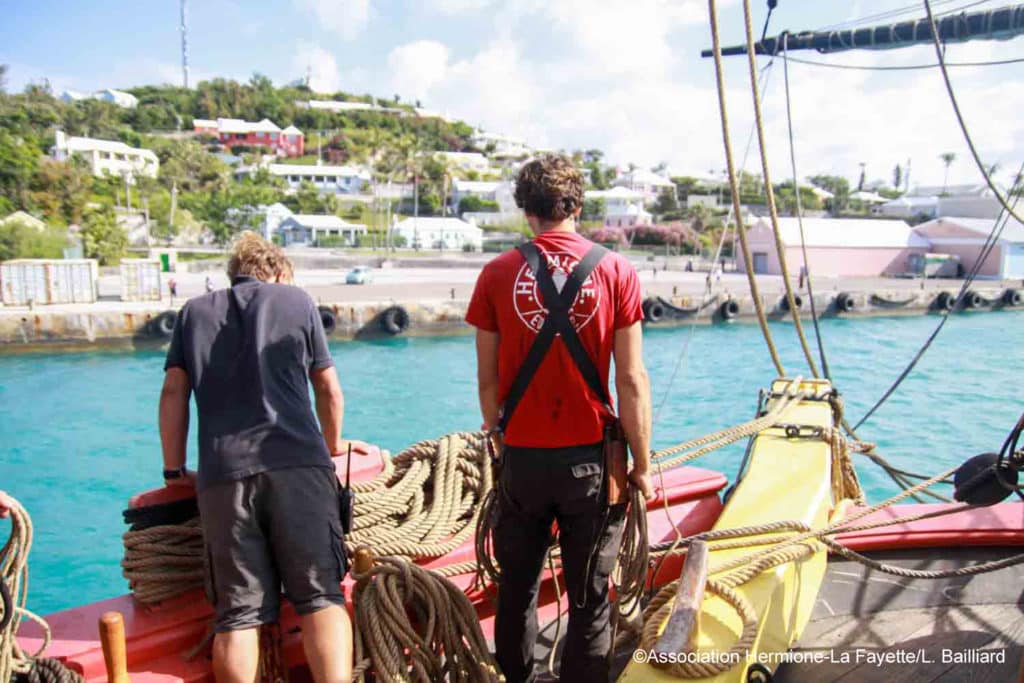 The Hermione left the port of Norfolk, which was closed to the public, where she had done all the paperwork for entering American territory. Next stop, Yorktown! 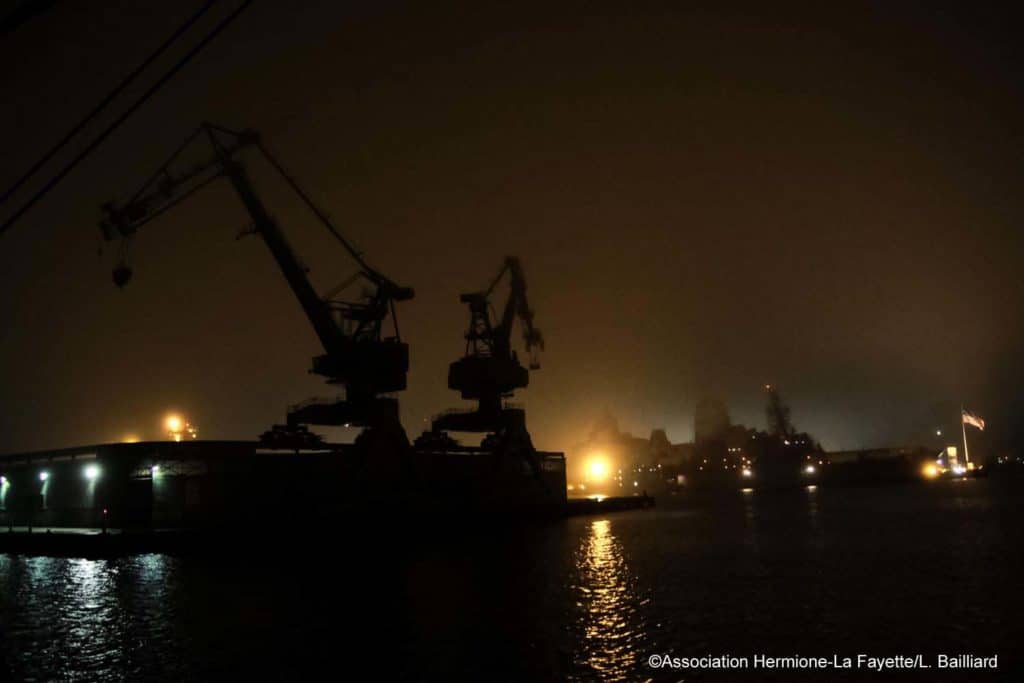 For her first American stopover, the Hermione chose Yorktown, in Chesapeake Bay. It’s a highly symbolic place as the battle that took place there in 1781 marked a turning point in the American War of Independence. 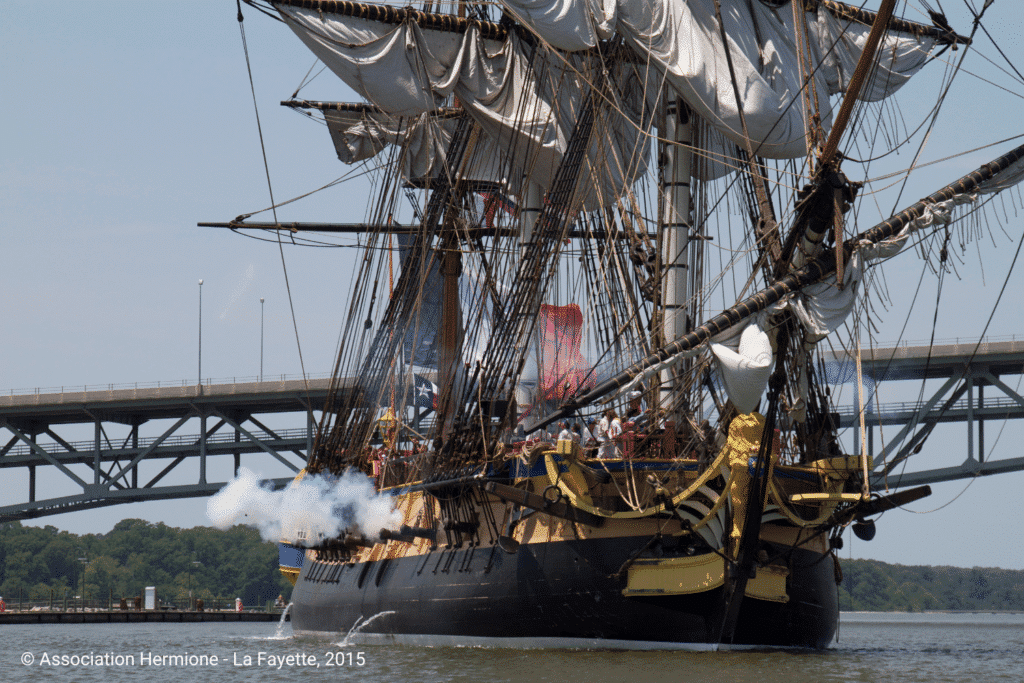 Mount Vernon is the estate of George Washington, one of the most iconic mansions of the 18th century. On 9 June, the Hermione anchored up for several hours in front of this property. 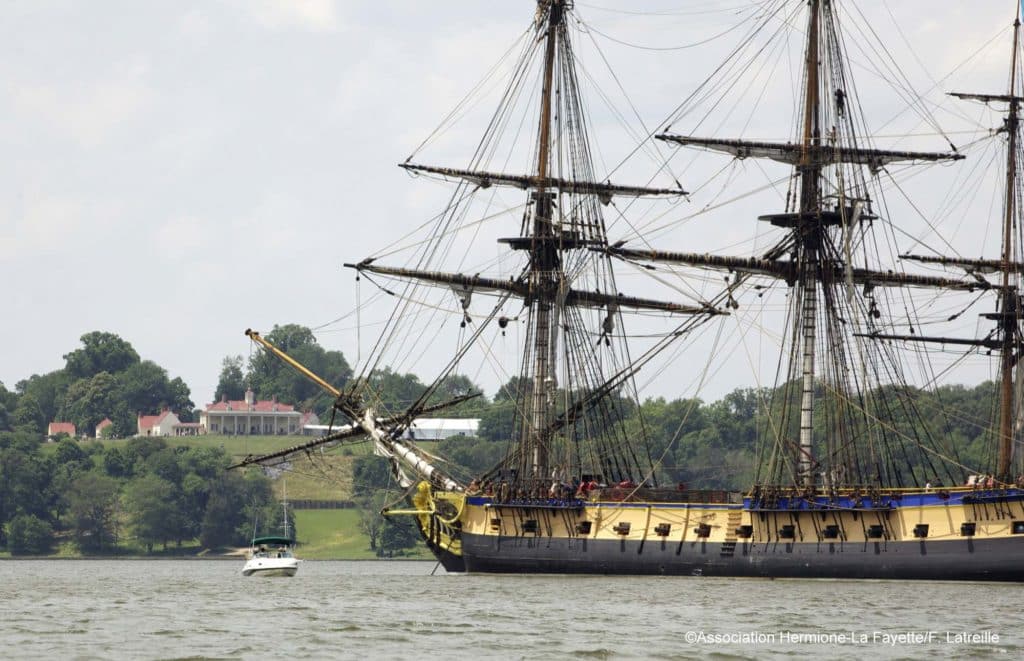 La Fayette had the opportunity to visit Alexandria several times during the War of Independence, as Washington DC did not yet exist. On his return to the United States in 1824, he would have attended the ballroom of Gadsby’s Tavern, an establishment that is still open to the public today. 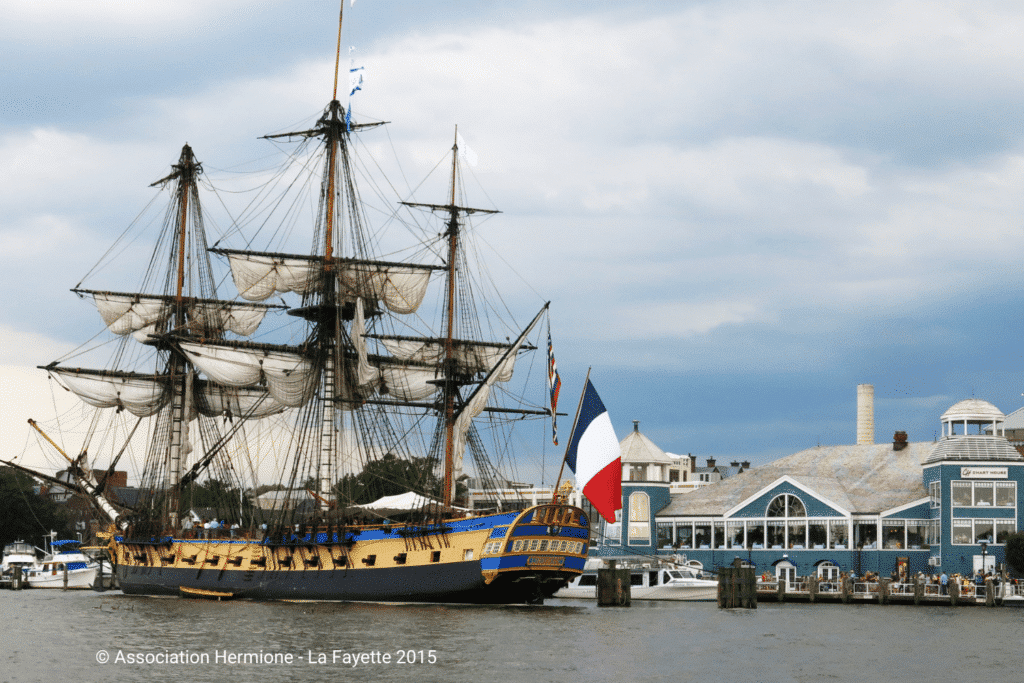 During the Annapolis stopover, a tribute was paid to the French soldiers who died for American independence. During the official welcoming ceremony, the parade made its way through the city to the monument at St John’s College. 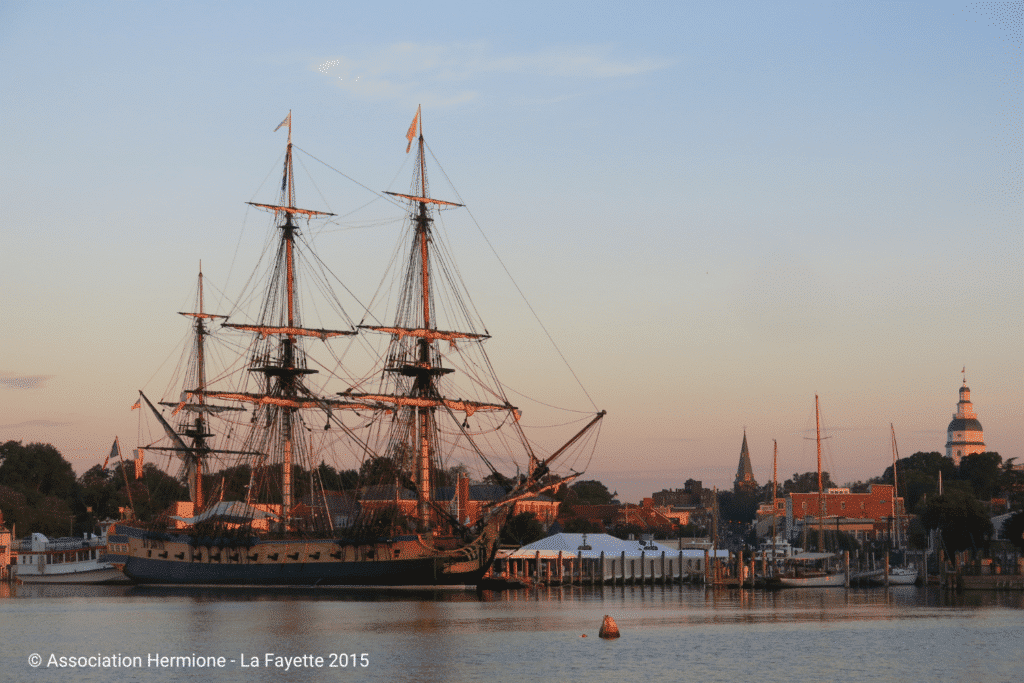 The Hermione meets the Pride of Baltimore II and the corvette USS Constellation there.

It’s a real change of atmosphere as this is the first time the Hermione has docked in the middle of a big city in front of the skyscrapers. 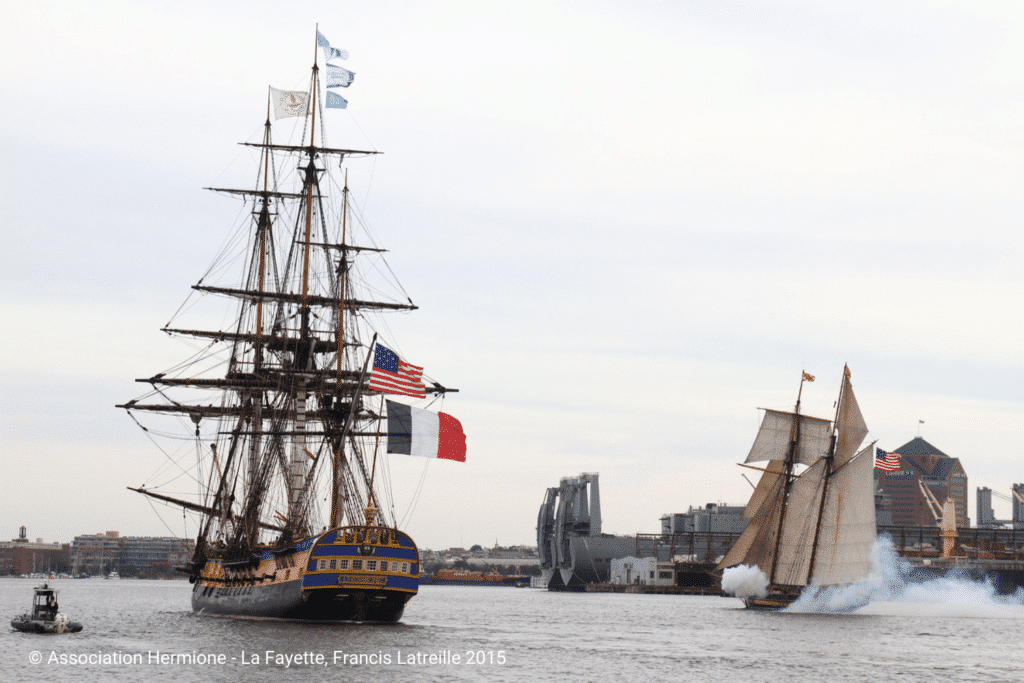 Storm blows up on the Delaware river

After leaving Baltimore, the Hermione was caught in a heavy thunderstorm. This included gusts of up to 55 knots and a solid wall of rain. 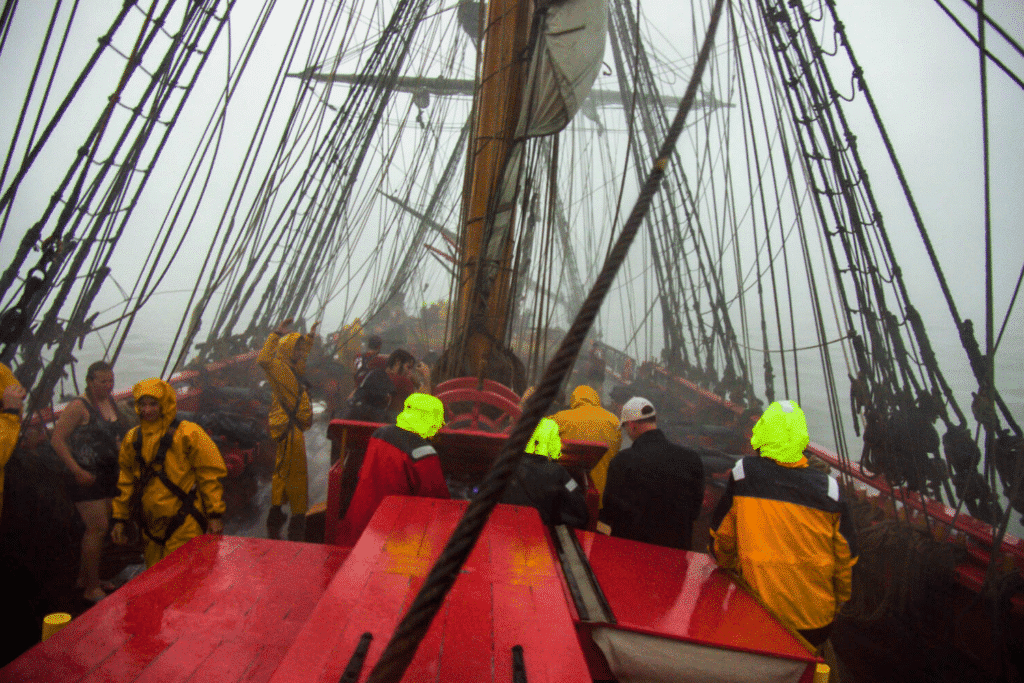 The Hermione joins the “TallShip America 2015”.

This stopover echoes 4 May, 1780, the date on which the Hermione was at anchor off Philadelphia and welcomed the American Congress on board. 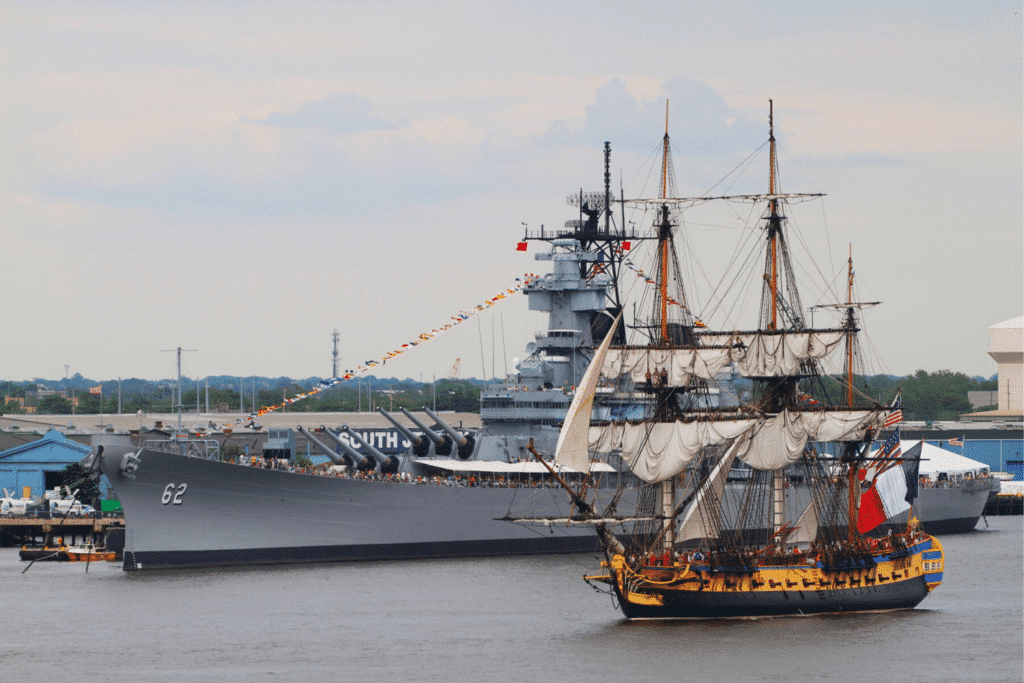 Arrival of the Hermione in New-York City

This is a stopover that has been awaited for over 20 years by all the key players in and supporters of the Hermione-La Fayette association! 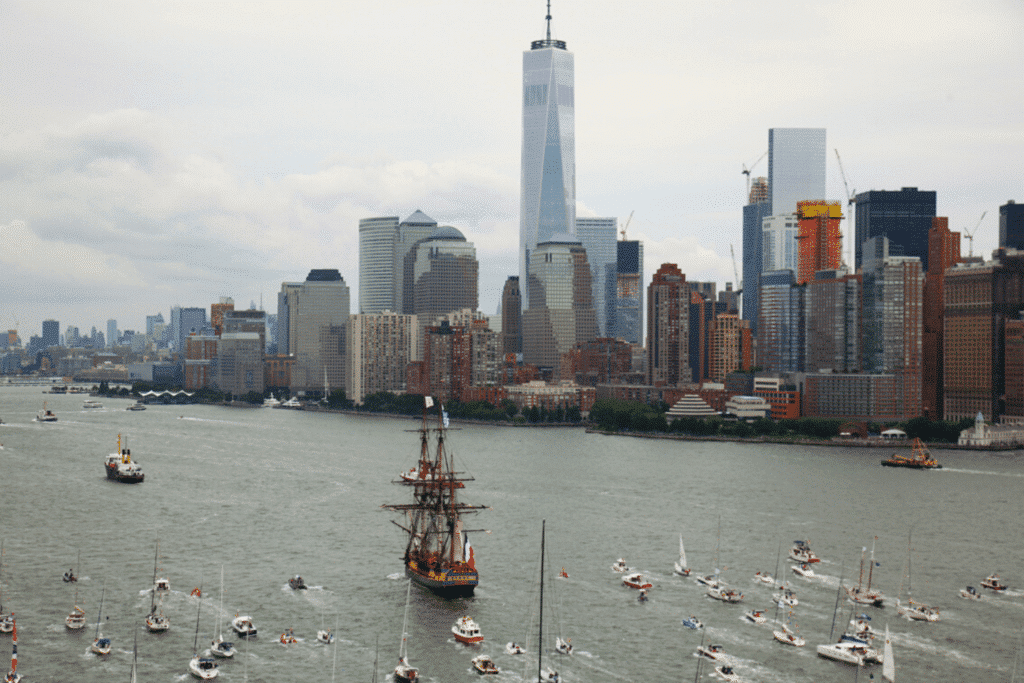 The high point of the stopover in New York: Independence Day! 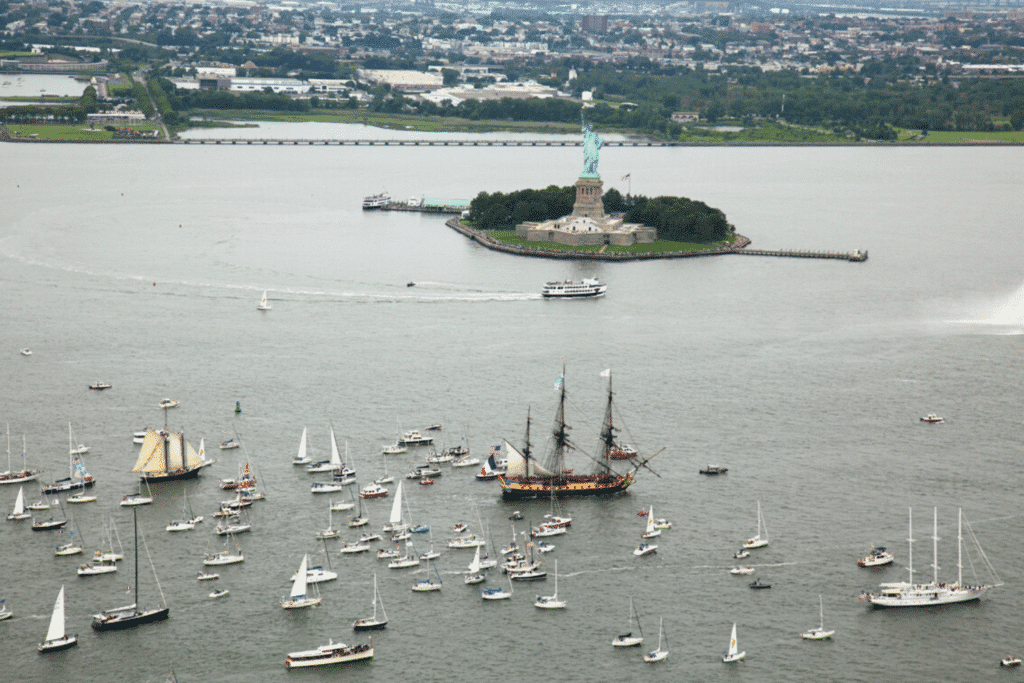 The Hermione stops over in Greenport on 6 July and 7 July, along with six Tall Ships.

At the quay, near the Portuguese three-masted bark Sagres, the frigate welcomes more and more of the general public on board.

The Hermione encounters the statue of Rochambeau. 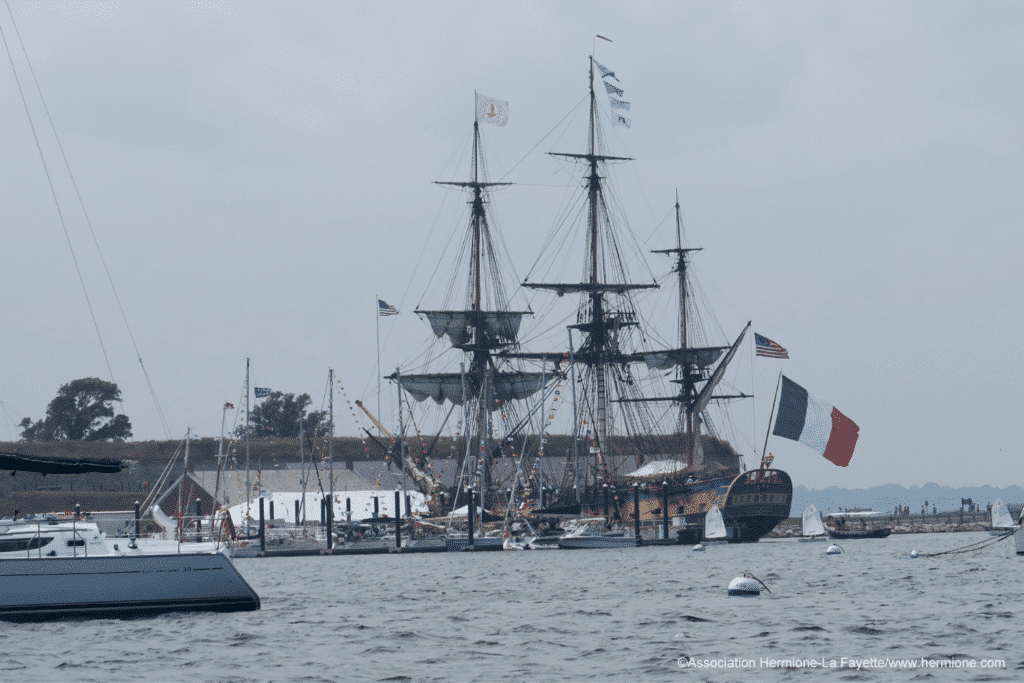 The Hermione arrives in Boston

On 28 April, 1780, after a 38-day transatlantic journey, the Hermione arrived in Boston with the Marquis de La Fayette on board. On 11 July 2015, 235 years later, the replica of the frigate is once again entering this great Massachusetts port!

On 14 July, to celebrate the frigate’s arrival, the community of Castine, supported by the dynamic local committee of support for the frigate’s voyage, celebrated Bastille Day. It was a warm, welcoming atmosphere in honour of the Hermione.

A little trip through Canada and the city of Lunenburg

Our very brief stopover in Nova Scotia was nevertheless one of the busiest stopovers we’ve had this trip. In just over 24 hours, we have actually hosted several private events and changed crew before the transatlantic crossing with  28 sailors disembarking and the arrival of 30 new volunteers. 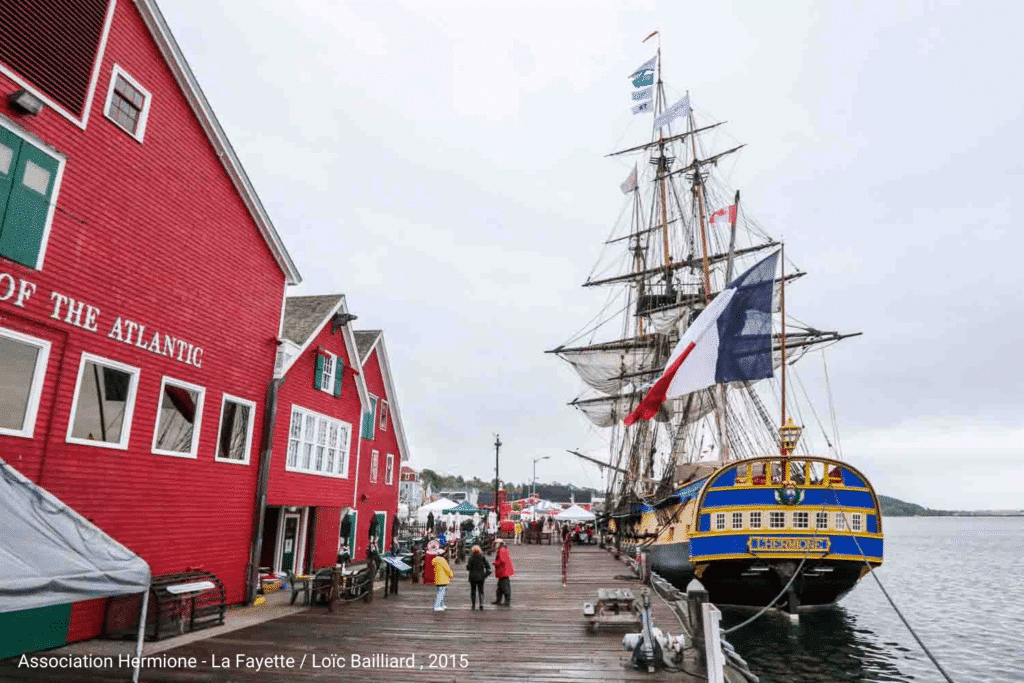 Back in France ... Overseas

The Hermione calls at Saint-Pierre-et-Miquelon, off Newfoundland. 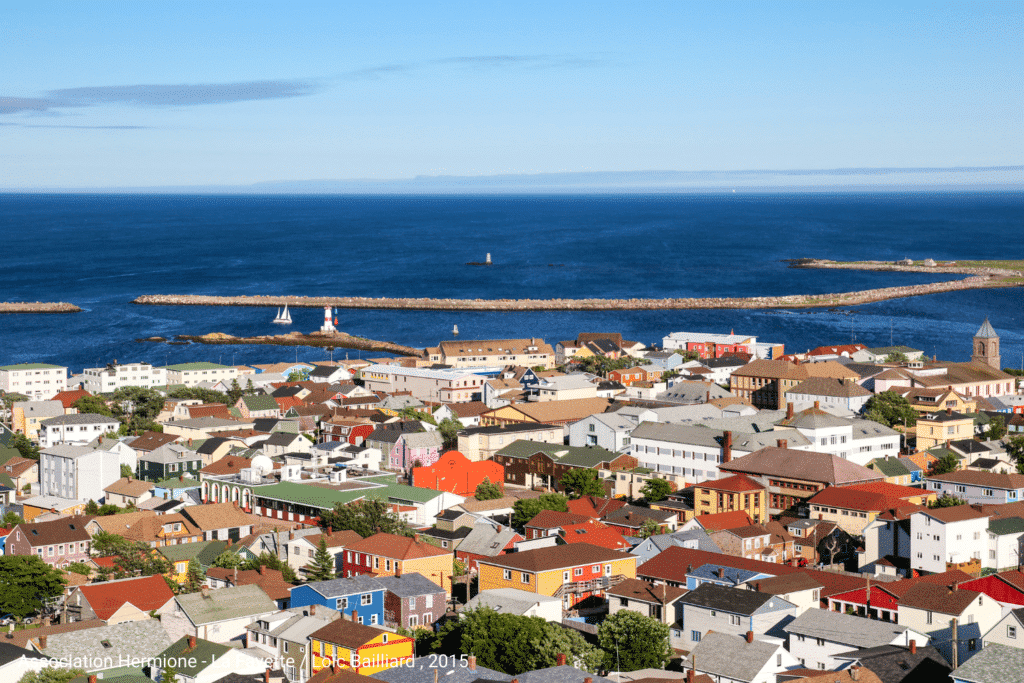 While we may be continuing to sail in the wrong direction for now, we are doing it with panache! We broke the distance record in 24 hours, between noon yesterday and today, with 215 nautical miles travelled, i.e. an average speed of around 9 knots. 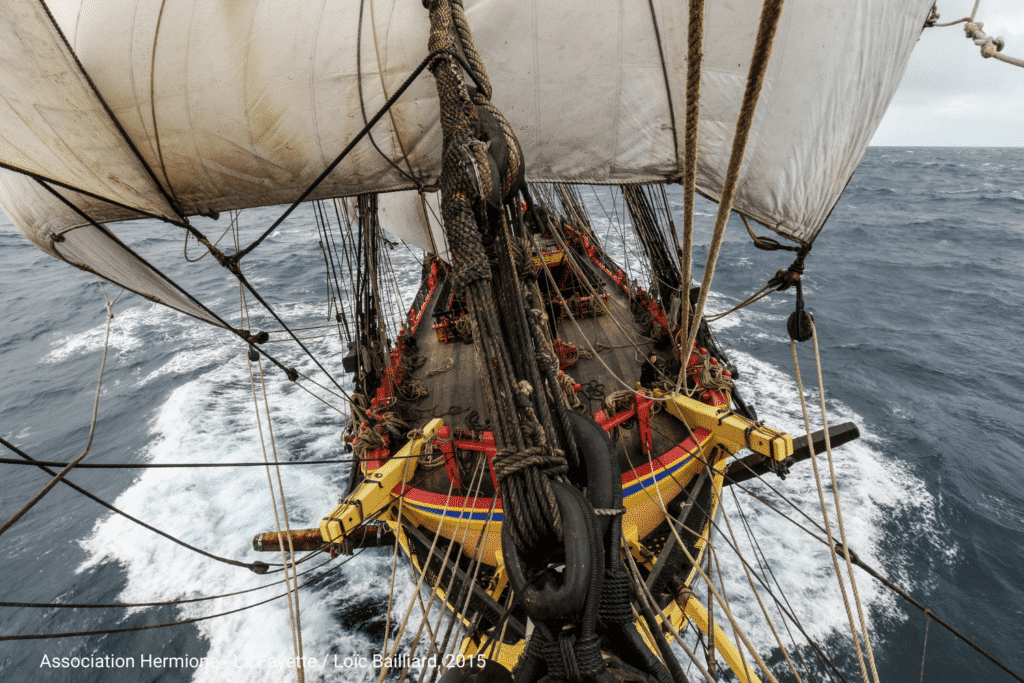 The Hermione is also helping with a European programme relayed by Météo France. It is a fairly dense network of buoys called “drifters”. Unlike Argo floats, these do not dive below the surface of the water. They float on the surface and drift, weighted by a floating anchor submerged at a depth of 15 metres. They record the temperature and atmospheric pressure and send this information as well as their GPS position to a system that centralises and analyses all of this data.
August, 10th

“It looks like Brittany! It smells like home!” That’s what the Commander of the Hermione, Yann Cariou, declared on Saturday, observing the blue sky and a milder sea, 48 hours before the frigate’s arrival in Brest, more than four months after its departure on April, 18th from the island of Aix. 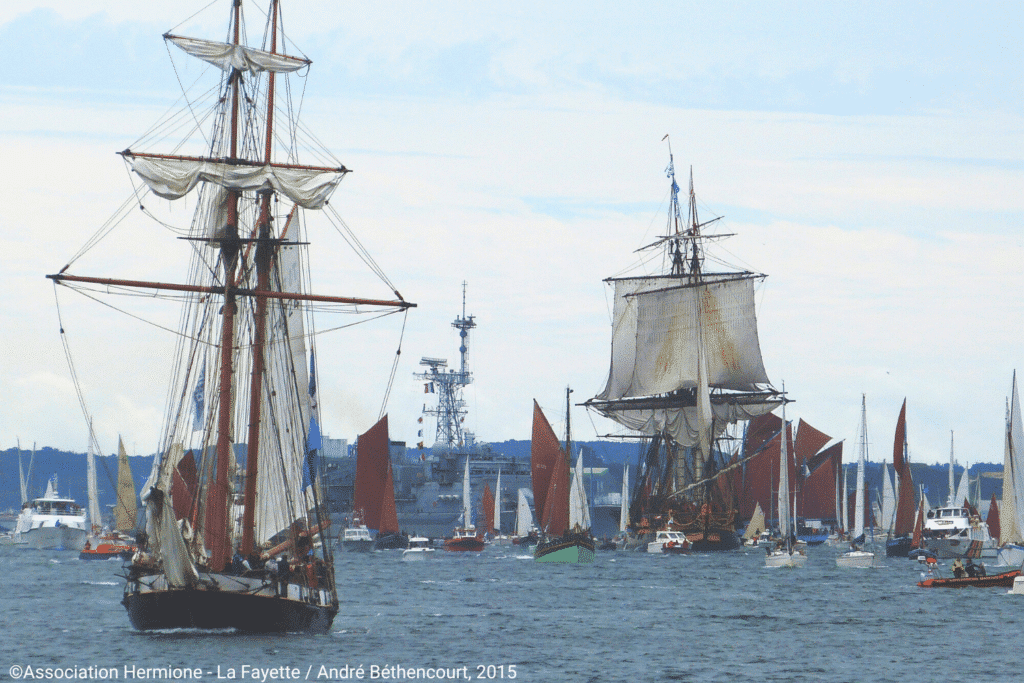 The fleet is numerous to welcome the Hermione in Brest.

After a remarkable passage near the beaches of Royan at the end of the afternoon on Wednesday, the Hermione arrived in Bordeaux for a new stopover.
August, 29th

We are sad and happy at the same time. We’re overcome by a thousand different confused, tumultuous emotions, which overwhelm us fleetingly in turns then dissipate. There are literal waves of feeling in the middle of the crowd during this surreal parade. 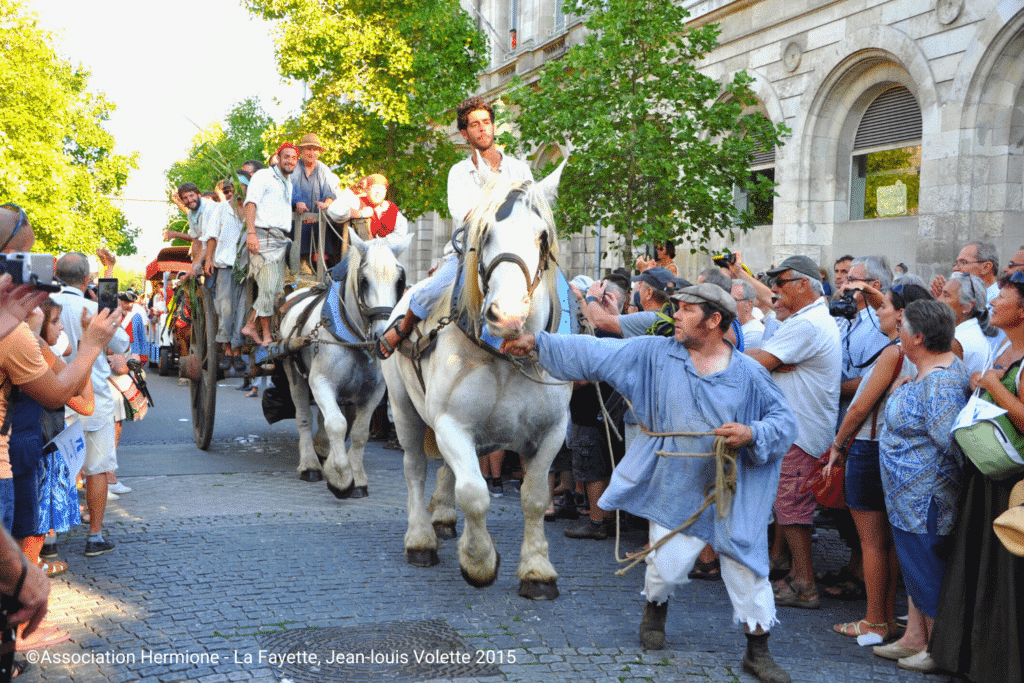